Aspiring architects earn a badge of honor for burning the midnight oil until the sun rises the next day. While their peers pull the pedestrian all-nighter, architecture students are “en charrette”, a more romantic moniker for a similar activity. But the word charrette itself, has evolved and taken on a new meaning – one that belies its origins.

In a New Yorker article last year, “The Art of Decision-Making,”1 Joshua Rothman ascribes the term to product design, and characterizes a design charrette as a process in which “. . . a large problem is divided into subproblems, each of which is assigned to a group.” He goes on to say, “Charrettes are useful . . . because they force groups with different priorities and sensibilities – coders and designers, architects and real estate developers – to interact, broadening the range of available viewpoints.” Although Rothman credits the method to “architects in nineteenth-century Paris,” these same nineteenth century architects, as students, had a rather different experience.

It was not collaborative at all. Each student started with an esquisse or sketch of an idea, which quickly developed into a parti, what we might now call the big idea. The rest of the school term was devoted to creating intricate watercolor renderings in support of the parti, drawings we identify as the essence of a Beaux-Arts education. “En charrette” (literal translation charrette = cart) was the expression used to describe the last days of cranking out the drawings before the design jury was convened, because the students placed their drawings on a cart and wheeled it into the design studio. In many cases, upperclassmen had help from underclassmen, forming an “atelier” in support of the future master.

Some Beaux-Arts terms are still used in architectural parlance, and many have retained their original meanings. Parti crops up now and then, and “atelier” is often used as a pretentious substitute for office. Poché is a fading Beaux-Arts term for the space within a wall or between the interior and exterior envelopes of a building, nowadays inhabited mostly by engineers. A special poché pencil was used to create a uniform drawing texture for this space. It wasn’t a pencil exactly, but more of a paper core cylinder used to smudge soft pencil lead. Alas, the term has been digitized to a far more prosaic word: hatch.

But essentially, poché literally means to smear. Imagine if poché had entered the common lexicon as has charrette. Political opponents would run poché campaigns against each other. LSU could have pochéd Clemson for the NCAA national championship. Or maybe Harvard could poché Yale. Probably not going to catch on, but the word is worth handing down within the profession before it completely evaporates. And in general, architects should spend more design time on what is actually in the poché rather than just hatching it.

In part, the life of the term charrette was extended by Lionel Spiro and Blair Brown, who in 1964 founded a drafting and graphics supply company in Boston, aptly named Charrette. It grew into the premier purveyor of tools of the trade to architects, with retail outlets in most major cities. It disappeared in 1997 when sold in a leveraged buyout to Service Point (now there’s a romantic name), a Spanish company, which eventually closed what was left of Charrette in 2013. Most likely it was the last place where one could buy a poché pencil.

And why has charrette evolved from defining a solitary activity to depicting a collaborative exercise? The charrette some of us may remember was the product of a curriculum assuming we were to become architects in the mold of Howard Roark, for whom design integrity was paramount at all costs, even if it meant destroying one’s own work. Well, that’s changed, too. The Fountainhead is one of Donald Trump’s favorite books, and Ayn Rand’s philosophy has become the underpinning of neoconservative thinking.

Maybe the new characterization of charrette is actually better than the original. Except for well-branded architects, the rest of us are rarely hired solely based on our ability as individual artists. And well-branded architects are constrained within the aesthetic window they themselves have created. Nowadays, collaboration is essential. But at the same time, a free-for-all charrette can lead to an ill-conceived design. Lack of respect for expertise is on the rise, and many of us have had to explain to planners, building officials, or neighborhood activists why their seemingly brilliant suggestions might not actually work.

Nevertheless, we architects will continue to search for the best balance between the Howard Roark paradigm and a more collaborative one. Some of us will continue to burn the midnight oil following the Beaux Arts tradition, while others will participate in charrettes as newly defined. No matter how you cut it, architecture is a time consuming profession.

Try to get some sleep. 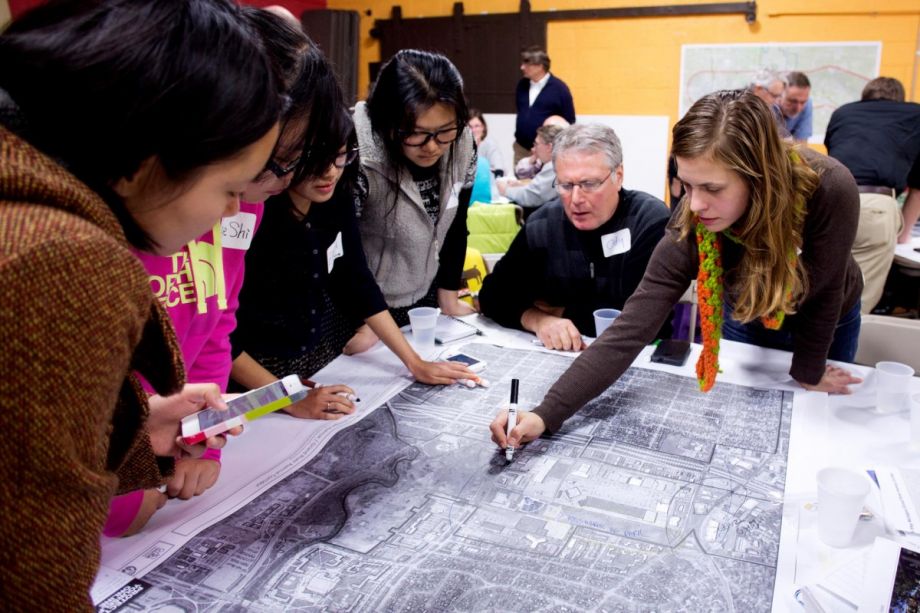