1 Kearny is a single building comprised of three fused-together elements constructed at different times. It anchors a prominent corner at the end of Third Street, one of San Francisco’s major transit arteries serving the downtown urban core. Built in 1902 as the Mutual Savings Bank, the primary element is an opulent twelve-story building fashioned in the French Renaissance Revival style. The second is a modern twelve-story annex constructed in the mid 1960s, designed by renowned architect Charles Moore. The third element is a new ten-story addition completed in 2009.

A number of technical deficiencies needed correction as well. The 1960s structure was designed to support the 1902 building in a “served-servant” relationship, following architectural theories of the time. The building’s core components, including elevators, fire stairs, and restrooms, had been located in the annex. The servant, however, was ill-positioned for the area it was intended to serve. The annex turned its back on views down San Francisco’s famed Market Street, and the elevator lobby was too large for a full-floor tenant. Also, typical of many turn-of-the-nineteenth-century buildings, the original structure did not meet modern seismic requirements. The annex was designed as a strong concrete structure but by itself was not strong enough to brace the 1902 steel-framed building.

The program was resolved by relocating the circulation core from the 1960s annex to the new addition, liberating the corner with the prime view to be used as future office space. The steel structure of the new addition, in concert with the concrete structure of the annex, form seismic “bookends” that brace the original jewel-like building without tearing into it - both are expressive of their roles as earthquake braces for the original historic building.

The completed building engages the city in two different ways, both satisfying agency requirements in a thoughtful manner. The roof terrace of the new addition is a privately owned public open space (POPOS)—an elevated park with one of the best views of the city. The interior of the main lobby, “Lightfold,” was designed by avant-garde architects IwamotoScott, specifically commissioned and approved as a work of public art.

The facades of the new building were designed to respect those built in the two previous eras, while also making their own statements as contemporary architecture. As local architectural critic John King observed: “Each piece is serious architecture, shaped by thoughts of how best to fit within the city in lasting ways.”1 The composition of the new facade is classical, with a clearly defined base, shaft, and capital, like its immediate neighbor. Striking vertical bands of terra-cotta echo the stair tower masonry of the annex. The new facades are textured with crisp metal fins that project out as sunscreens above windows on the south-facing elevation.

The newest portion of 1 Kearny is clearly differentiated from both the French Renaissance Revival building and the modernist annex, but it takes design cues from each, just as Moore’s annex took cues from the original building. The new addition is carefully crafted to stand on its own quietly while making reference to both older structures. 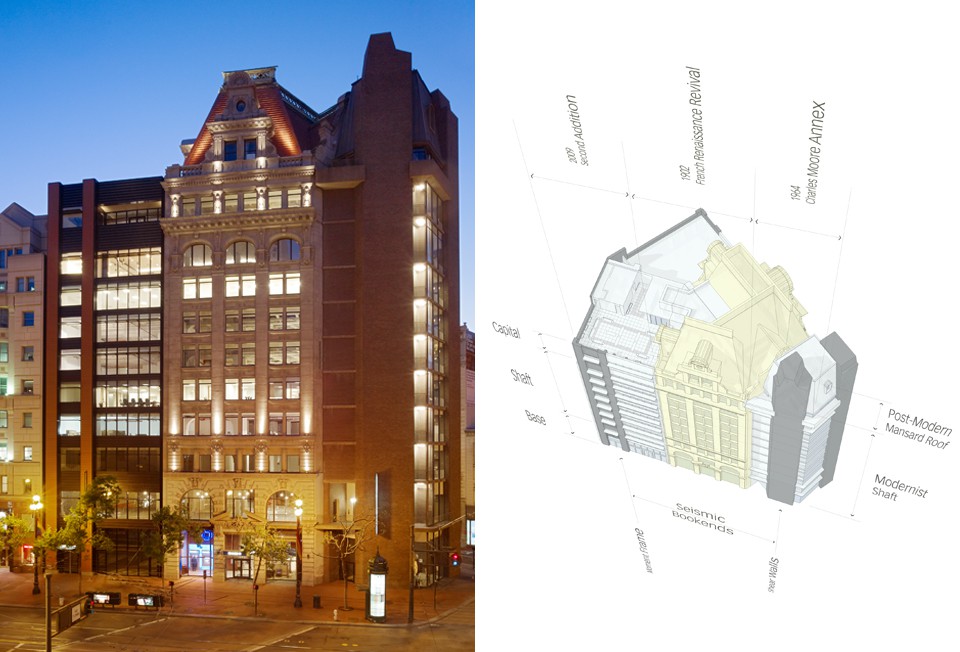 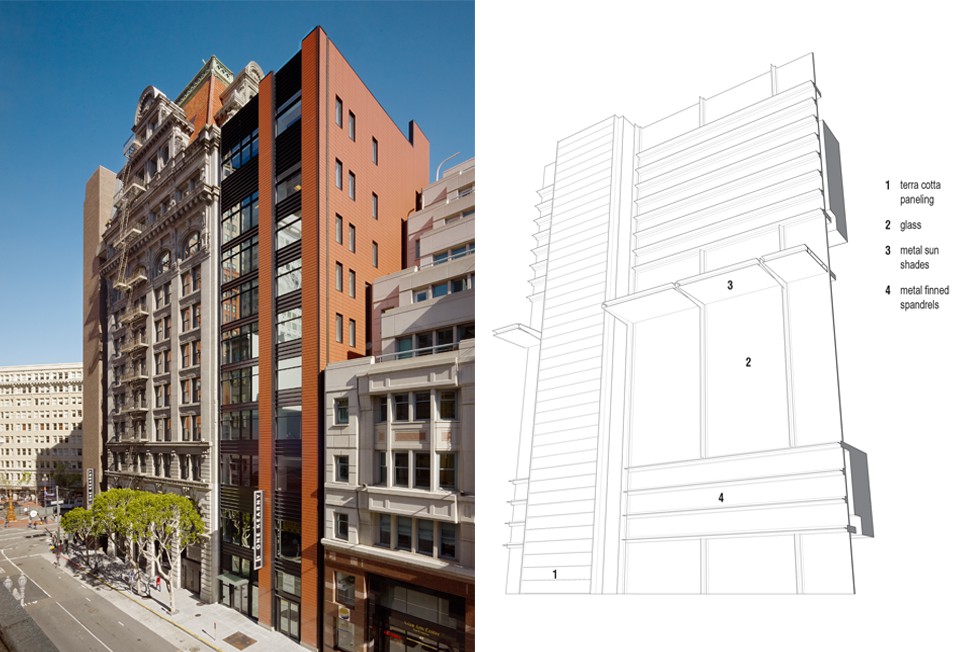 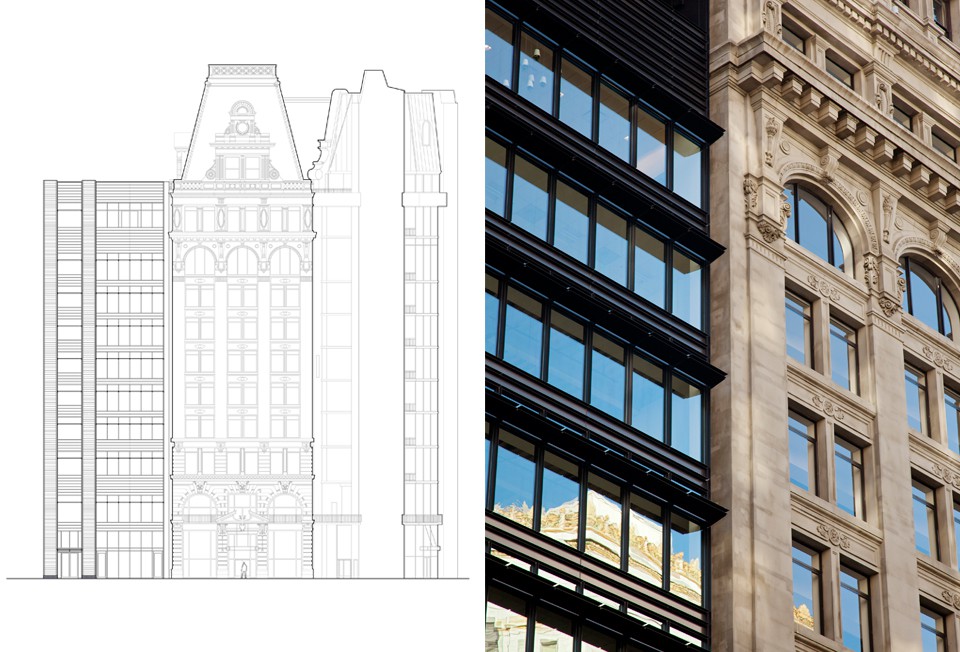 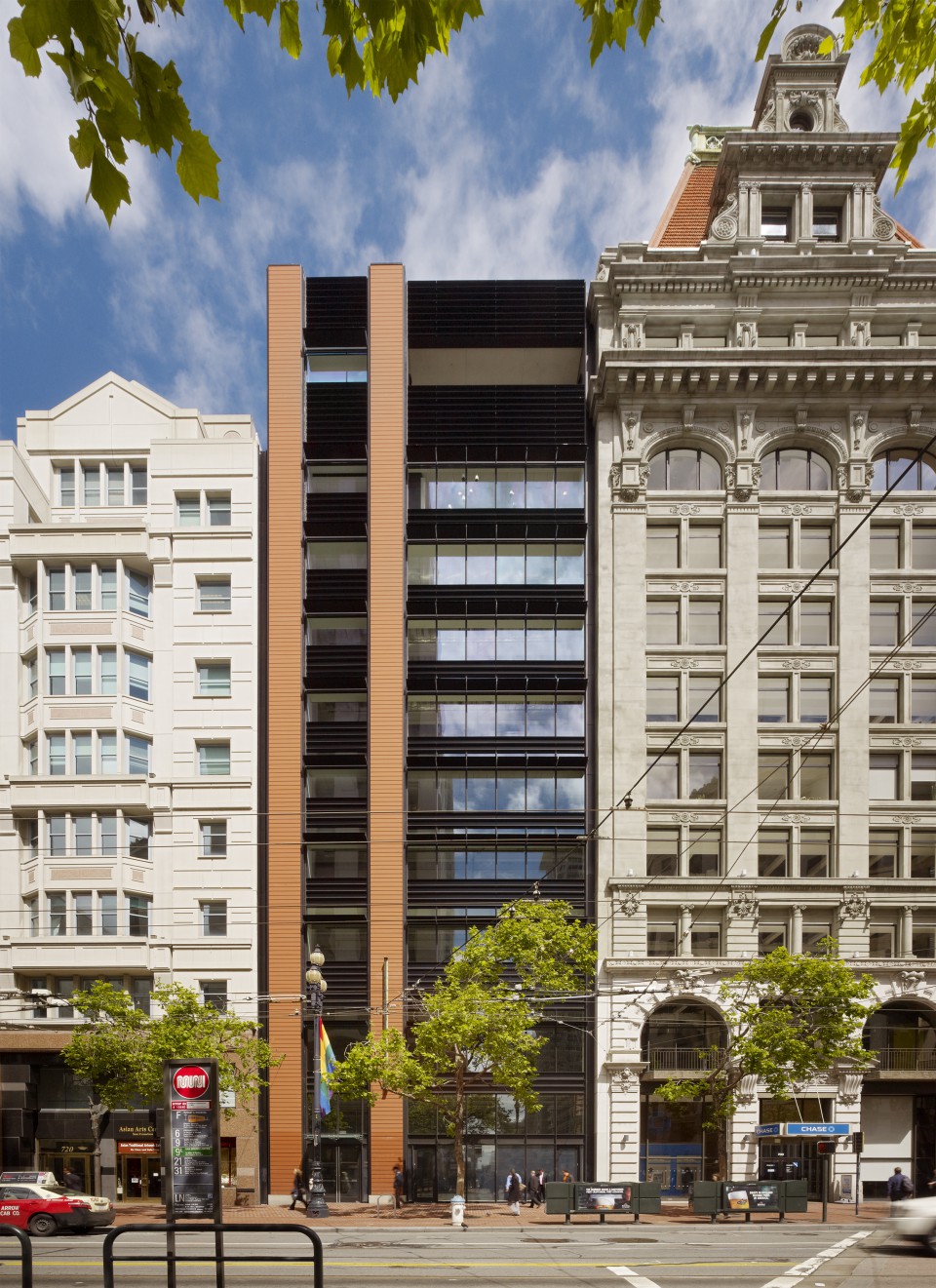