An abandoned parking garage stood as an eyesore on a prominent corner as buildings around it were transformed to meet the demand for office space in San Francisco’s South of Market (SoMa) district. Boston Properties acquired the site as part of a larger development and asked for a distinctive, eye-catching makeover of the existing concrete structure.

Boston Properties is a well-known real estate investment trust with a distinguished corporate portfolio, and not known for unconventional design. However, for this site, they requested a striking, attention-grabbing structure that would stand out against the well-tailored architectural background of the tower behind it. To achieve this effect, the second floor is wrapped in a metal screen, a kind of architectural lamé, cut from aluminum sheets using computer numerically controlled (CNC) machines driven by files created using Grasshopper, a parametric plug-in for Rhino (a 3-dimensional modeling program). The gap between the original façade and the new screen contains two rows of LED lights – at night the second floor appears to hover above its delicate supports. The lights change color bi-weekly according to a series of programmed scenes, some of which reflect a holiday or civic event. The building is topped by a glass cornice, conceived to protect the gap between the metal screen and the building wall, but from some viewpoints serendipitously reflects the screen pattern below increasing its vertical dimension.

Slender stainless steel tubes were inserted to replace the ground floor concrete columns, and a glass storefront was set back from the streets for better site circulation. A covered courtyard was created on Folsom Street to receive the adjacent 680 Folsom podium stair and to serve as the entrance to the second floor, occupied by Metromile, a “tech” start-up. An existing open area on Third Street was developed as a landscaped public courtyard and will serve as the entrance to a future ground floor restaurant. A new steel framed roof structure was constructed to replace the timber-framed roof, and new concrete elements were added internally for seismic resistance.

Materials chosen for the building envelope are rudimentary: aluminum, stainless steel, glass, and concrete. The design is anchored to the ground with rough, board-formed concrete low walls separating varying grades and acting as benches at the courtyard. The machined aluminum screen, coated with metallic automotive paint, contrasts with the rough ground plane below and is visually (and structurally) supported by the thinnest possible stainless steel columns.

Parametrically modeled forms are the rage in architectural studios worldwide, but are rarely built, especially for corporate developers operating in aesthetically timid cities like San Francisco. 690 Folsom proves that a client-driven design with an avant-garde timestamp can be an appropriate stitch in the urban fabric, no matter how conservative it is. 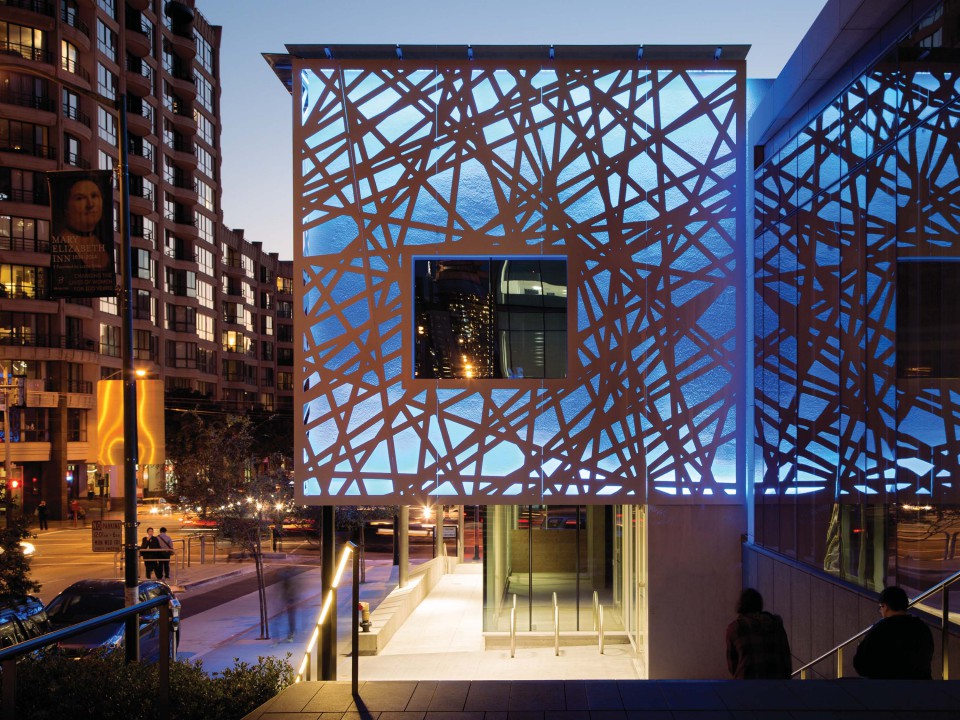