Founded in 1997 by college classmates with a passion for art, architecture, and design, Blu Dot is a manufacturer and designer of modern furniture.  Blu Dot’s furniture can be found in many independent design stores, online, and in the company’s own retail locations.  With the lease on its first San Francisco store on Valencia Street scheduled to expire, Blu Dot found the ideal site at the foot of Potrero Hill among other design-oriented enterprises, a pair of vacant buildings at the corner of Missouri and 17th Streets.

The building at 99 Missouri was formerly the home of ARCH, a graphics supply company well-known to San Francisco architects.  The owner decided to pursue an expansion of the building combined with its neighbor, a former auto body shop.  The lease ARCH had held for over two decades was terminated.  The two lots were merged, and the original concrete structures were structurally upgraded to prepare for an additional two floors.  Development plans, however, did not pan out, and the two buildings became an eyesore in a district otherwise experiencing vibrant growth.

Collaboration is the hallmark of Blu Dot’s design thinking, and the transformation of the two buildings into a new showroom was a joint effort between the local architect and Blu Dot’s own designers.  The new vision commenced from a raw starting point – the development project was abandoned after earthquake bracing for two additional stories had been installed as well as a second floor, capped as a “temporary” roof.  The ground floor was dirt, and the windows were all boarded up.  Consequently, the design emerged as a combination of subtraction and addition of structural and architectural elements.  Superfluous bracing and internal walls were removed to open up the interior, and a false façade at the corner (never completed) was removed.  Window openings were enlarged to create an organized exterior rhythm and to let in more light.  A board-formed concrete parapet extension was added to provide a uniform horizontal cap.  Steel window frames popping out of the façade like over-sized Tiffany windows were fashioned to be in concert with the scale of the industrial windows found on nearby buildings.

The interior design was approached much like a gallery – space as an armature in which to display art, in this case, Blu Dot’s product line.  Floors are terraced to be flush with exterior grades at different levels, finished with unvariegated wood flooring or polished concrete.  Interior fixtures are integrated with structural elements resulting in a simple, crisp interior setting.  The interior envelope is painted white to function as background for the pieces on display.  Plinths were built on the interior side of the pop-out windows so furniture could be displayed at eye level from the exterior.

Although known for its progressive values, San Francisco planners and neighborhood groups mandate a rather conservative architectural expression – one that is typically contextual.  The goal of this transformation was to provide Blu Dot with an architectural expression consistent with its furniture design ethos, but at the same time one that fit the long ago established industrial character of the district. 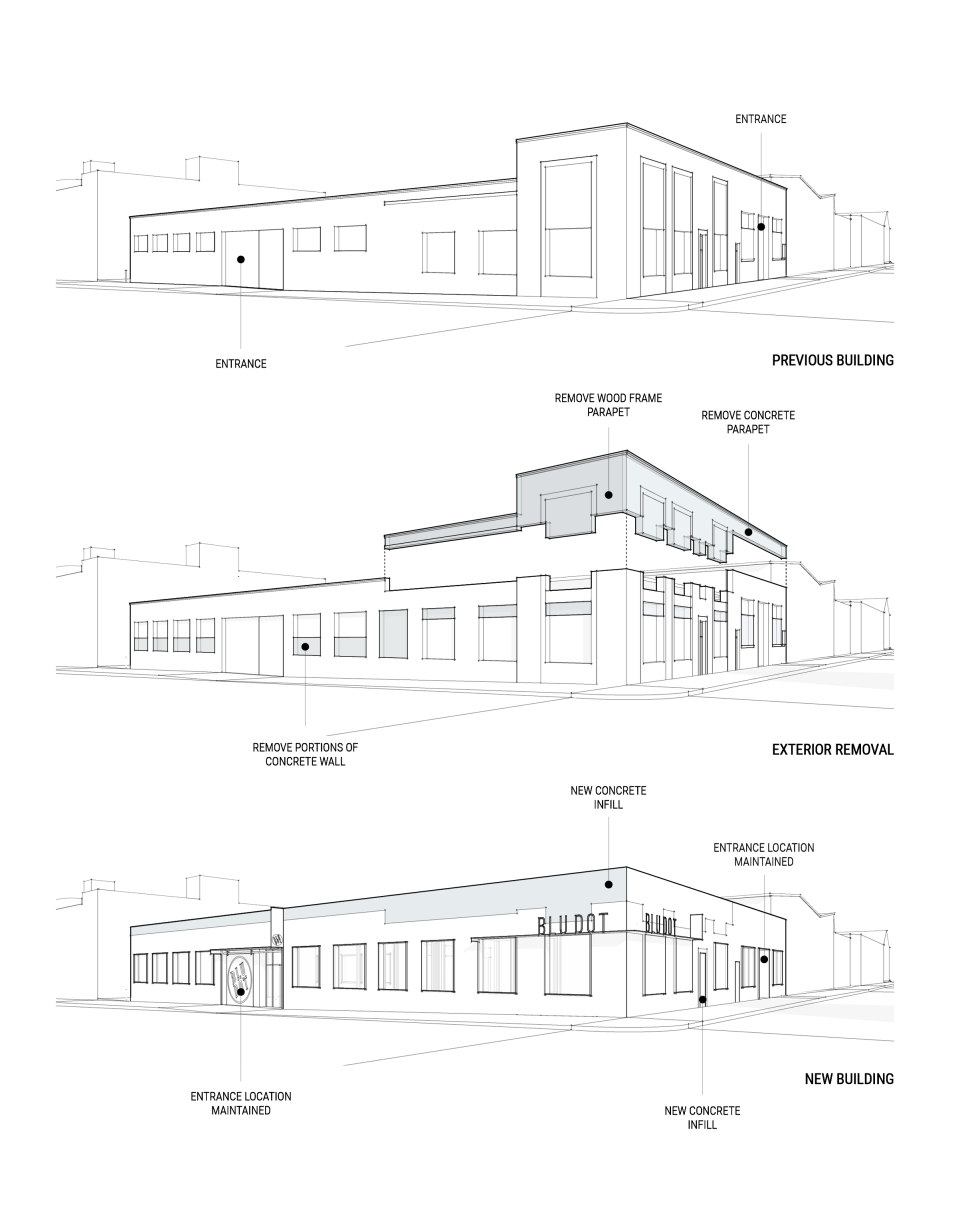 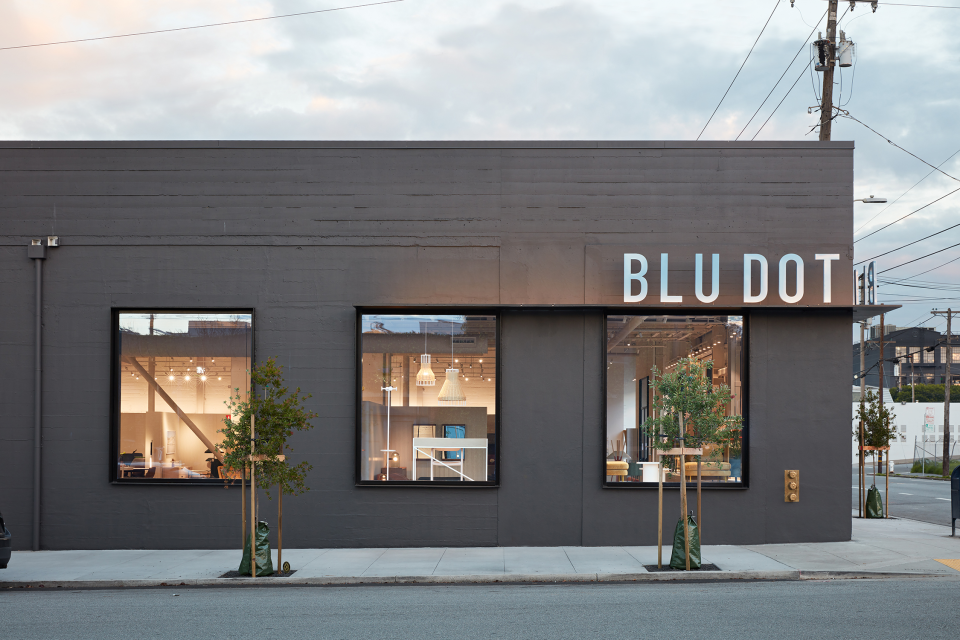 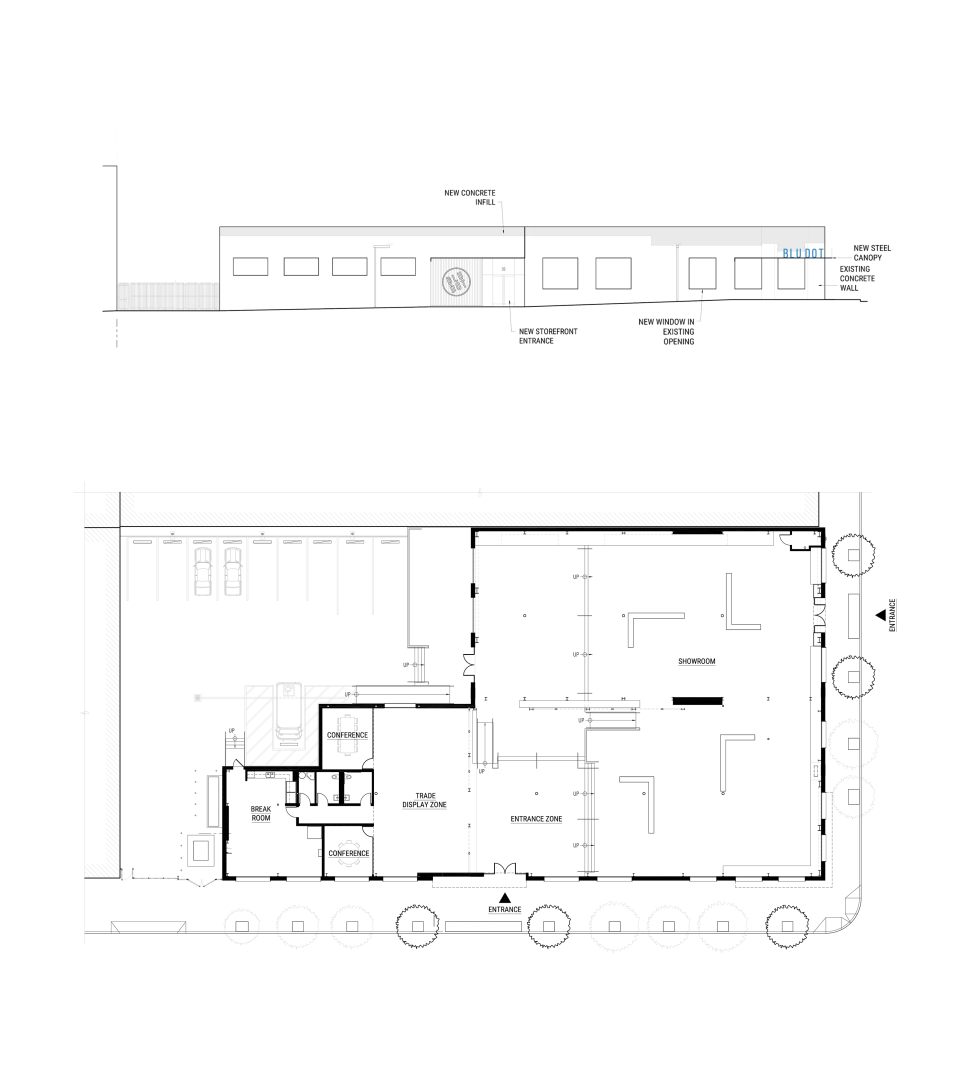 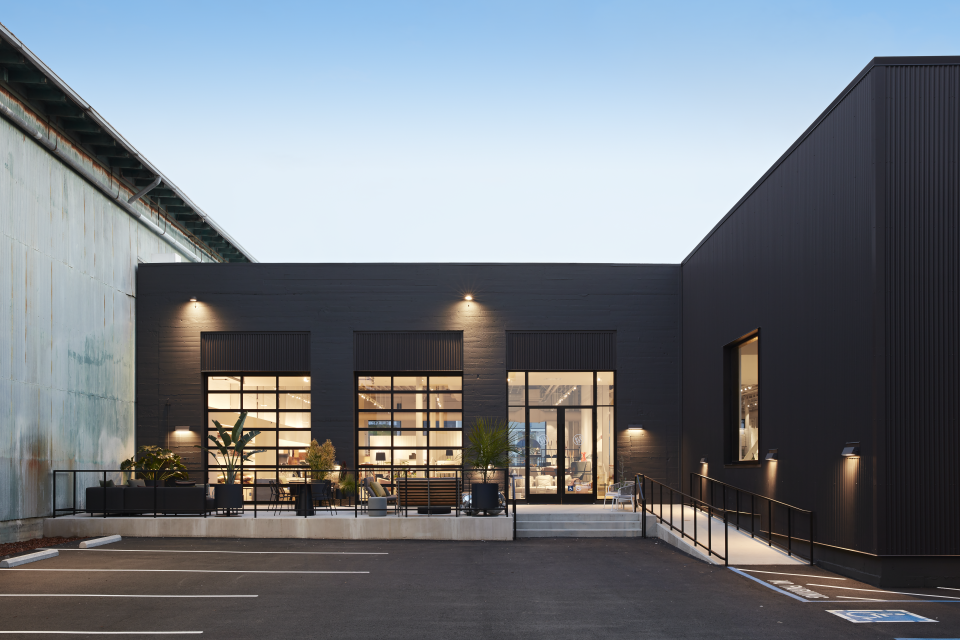 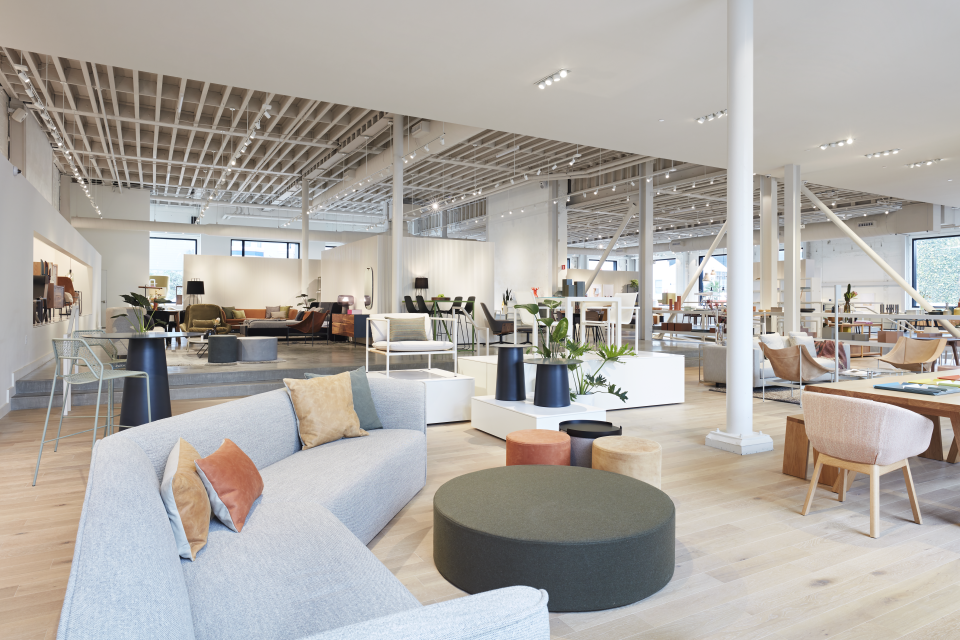 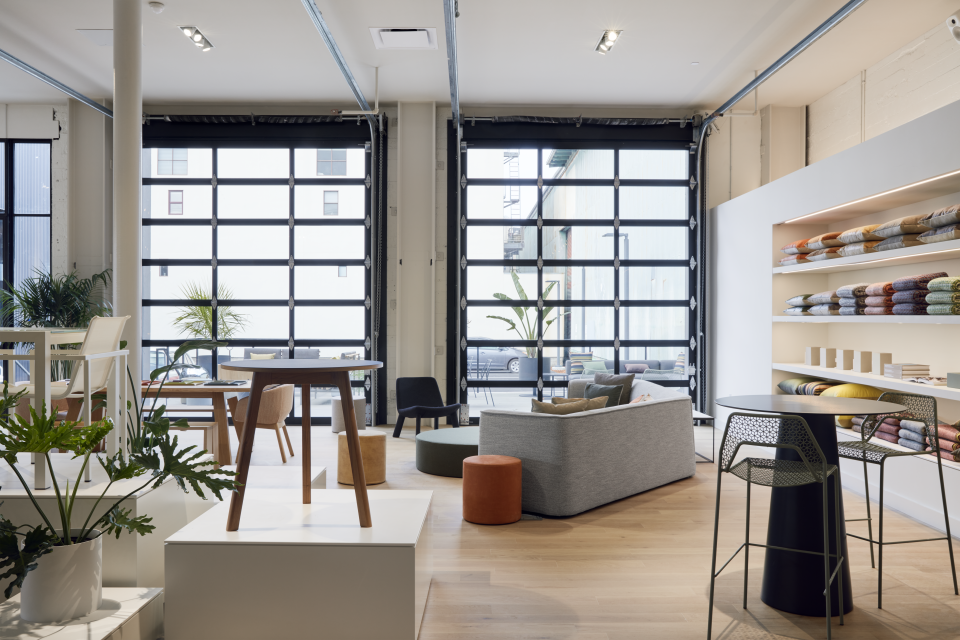 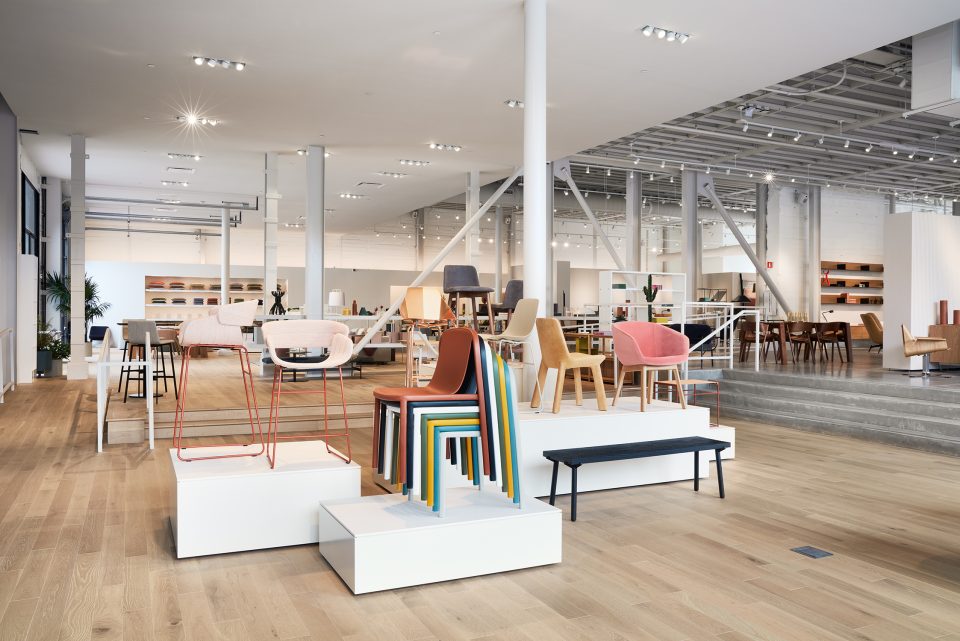 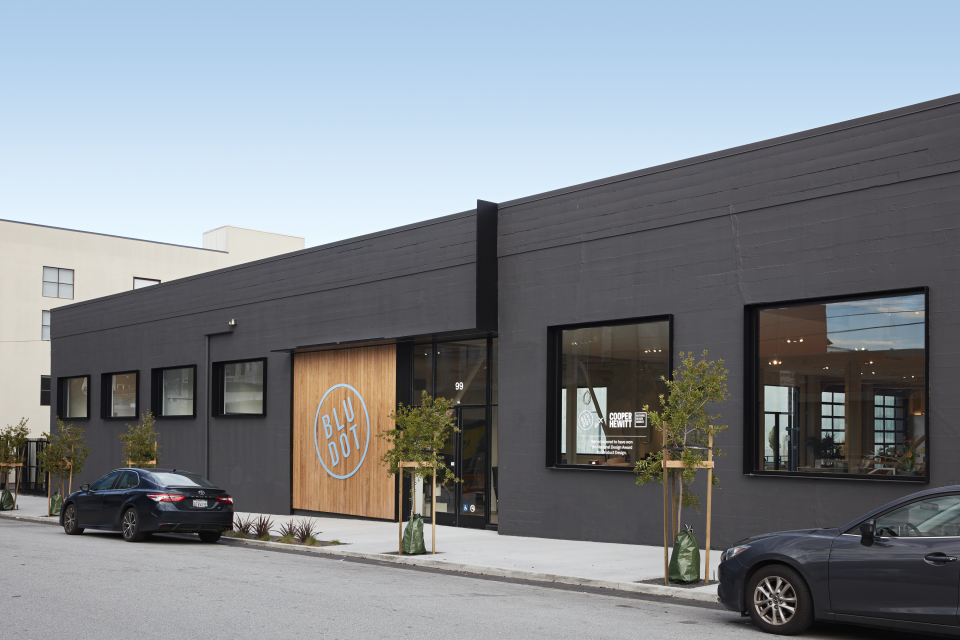