Grace Cathedral Close encompasses an entire city block atop Nob Hill, the site of the Crocker Mansion until razed by the famous San Francisco 1906 earthquake and fire.  The Close is now a venerated historic landmark; a collection of anachronistic, but beloved buildings.  Grace Cathedral is a steel frame encased in concrete rendered in medieval Gothic style, completed in 1964.  The surrounding ancillary buildings are historic in appearance but were erected during the twentieth century.  The Cathedral School for Boys sits at the upper-most corner of the site, adjacent to the apse end of the Cathedral.  It is a concrete structure built in the 1960s, and according to historic legend, took its cues from Le Corbusier’s Chappelle Notre Dame du Haut in Ronchamp, France.

During its 50+ year history, the school has expanded a number of times into adjacent buildings and even into the cathedral itself.  The cafeteria, gym, and performance spaces are in the cathedral’s crypt!  Identified in a strategic plan for the school’s future, space was needed for contemporary learning practices where students from different grades could be assembled for collaborative studies.  Two such spaces were programmed: a large Co-Teach room for lower school boys (Kindergarten-3rd grade) and a Learning Commons for upper school boys (grades 4-8).  The Co-Teach room could double as a space for social functions – a new heart for the school.  Given the block was already jam-packed with buildings – where could these new spaces be built?

One possibility was a sliver of space between the cathedral and the school where an outdoor terrace structure with classrooms below had been added in 2009.  This proved to be the only feasible site and also afforded platform (the terrace) onto which an addition could be erected without new foundation work or seismic strengthening of the original building.  Because the site was at the side of the existing school’s footprint, how could the new addition become the new focal point?

The exterior of the addition was conceived as a work of its own time, but one to sit comfortably in an architecturally strong context.  The glass and aluminum curtain wall is light in appearance as well as self-weight so the existing terrace could support it.  The pale green color was carefully chosen as a reference to nearby verdigris building elements and to avoid traditional grey or black mullions which would have presented a dark form when viewed from the cathedral courtyard.  From the inside, the addition captures views not seen before of the cathedral and the city beyond.

The real success of the project was schedule.  During the three month summer break, the classrooms were completely renovated, and the rough, noisy work related to the addition was completed.  A temporary fire wall was erected between the classrooms and the addition shell so it could be finished while school was in session during the fall term.  The choice of a curtain wall system for the exterior was unusual but also schedule driven – it was erected in just over a week.  All during a pandemic.

The strategic plan vision was executed, and the school now enjoys a new, fresh look as well as much needed extra space. 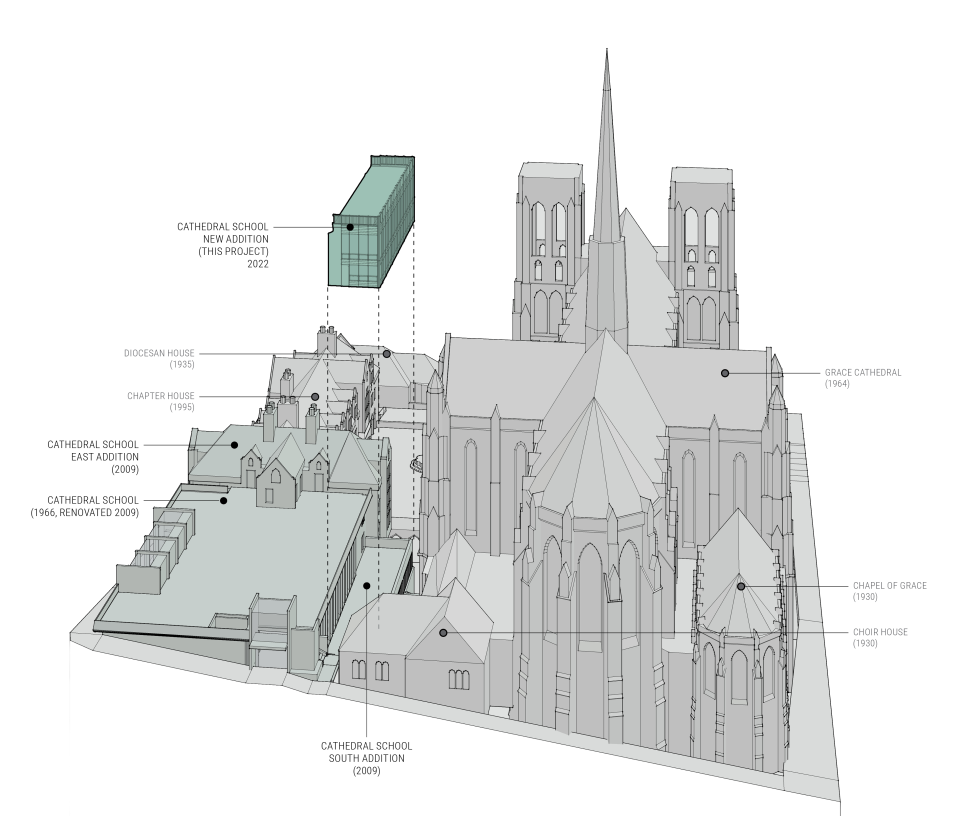 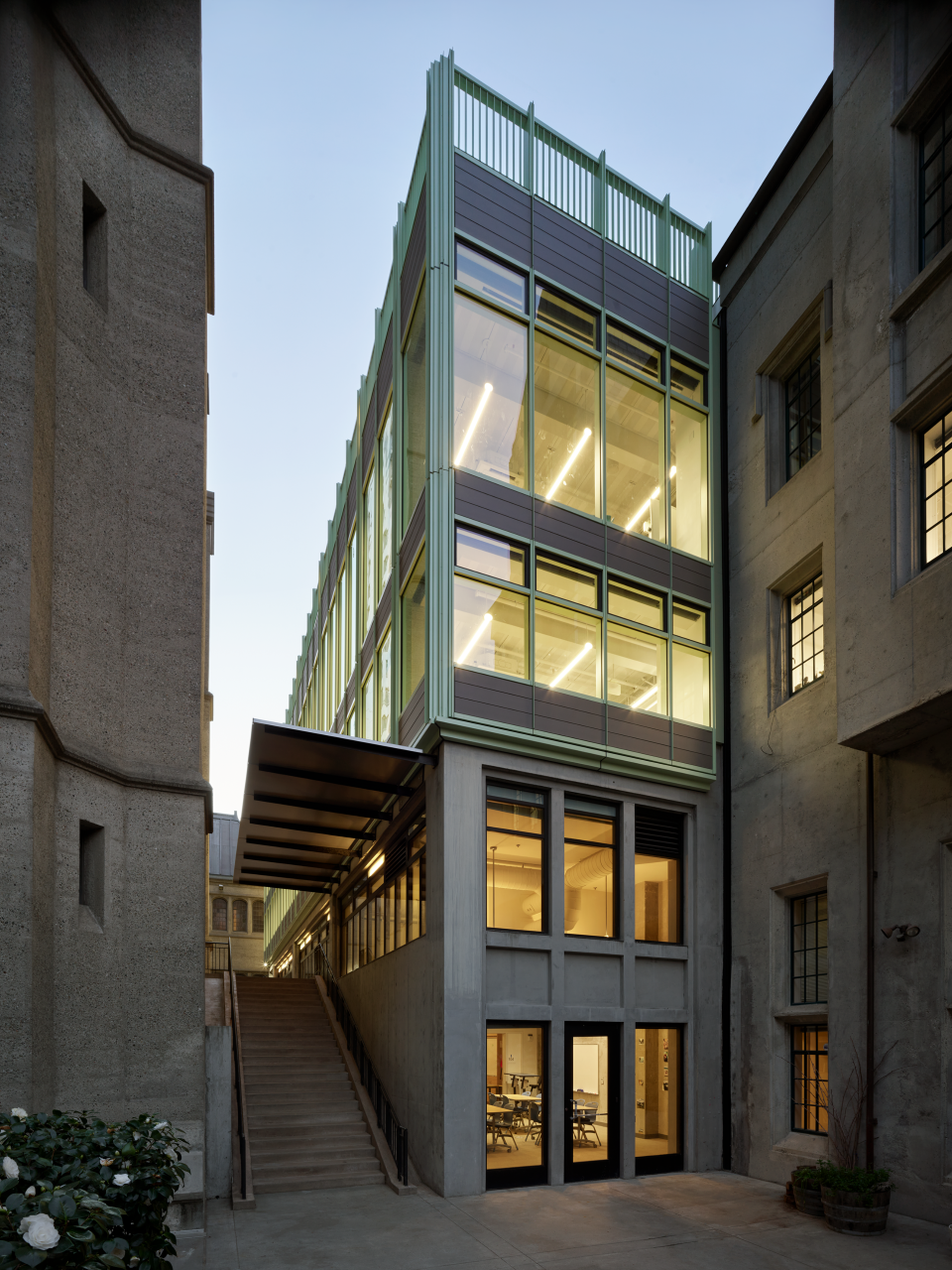 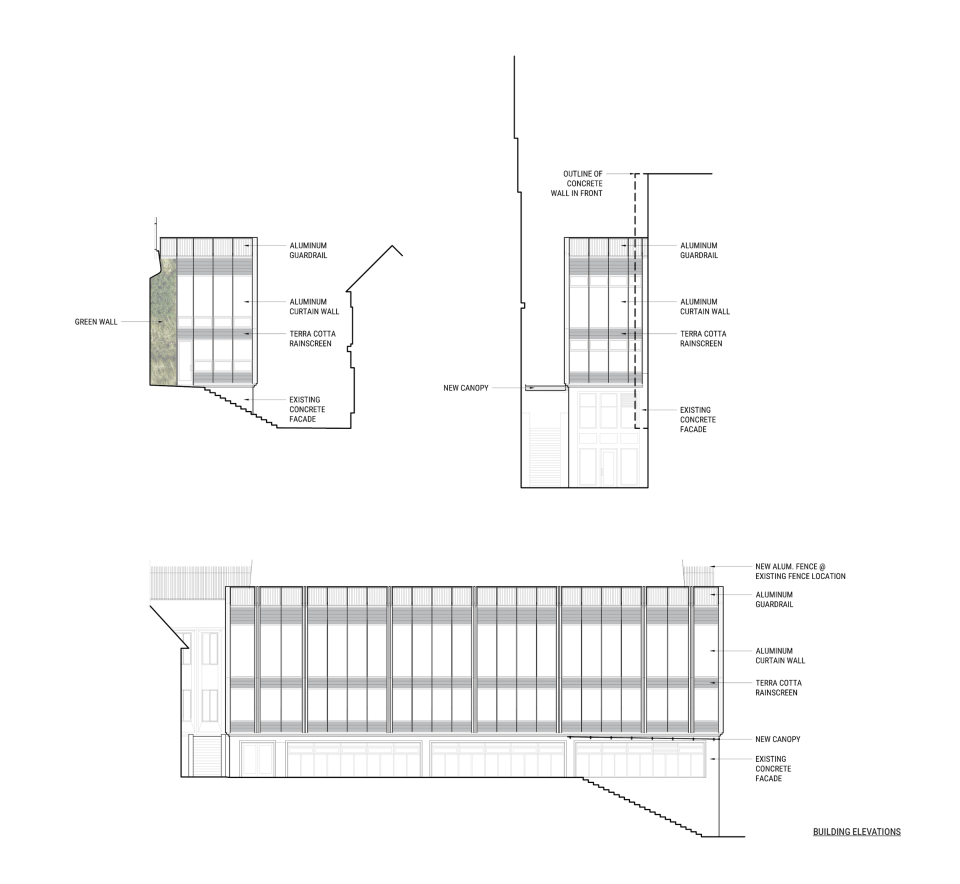 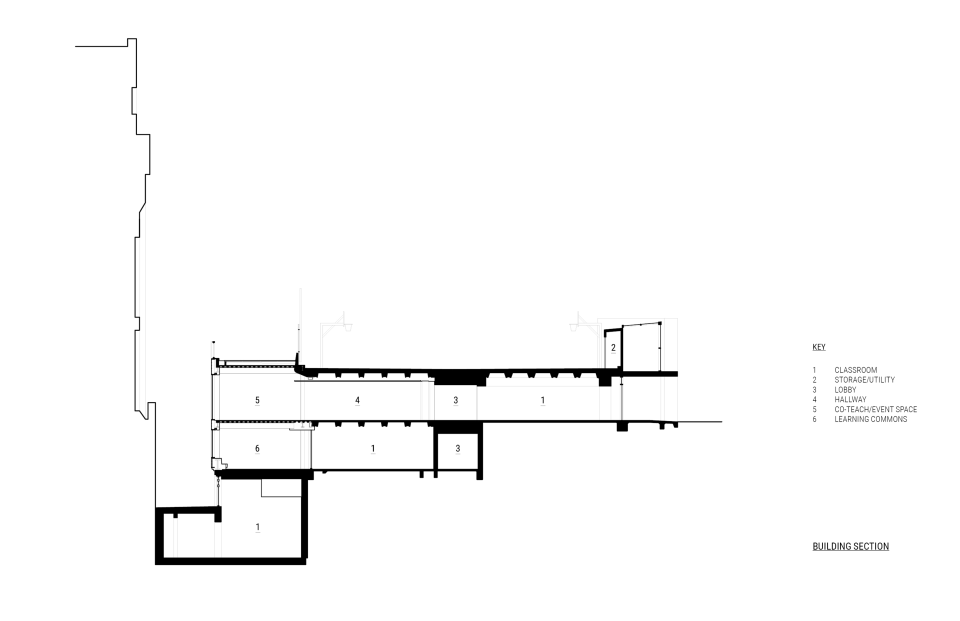 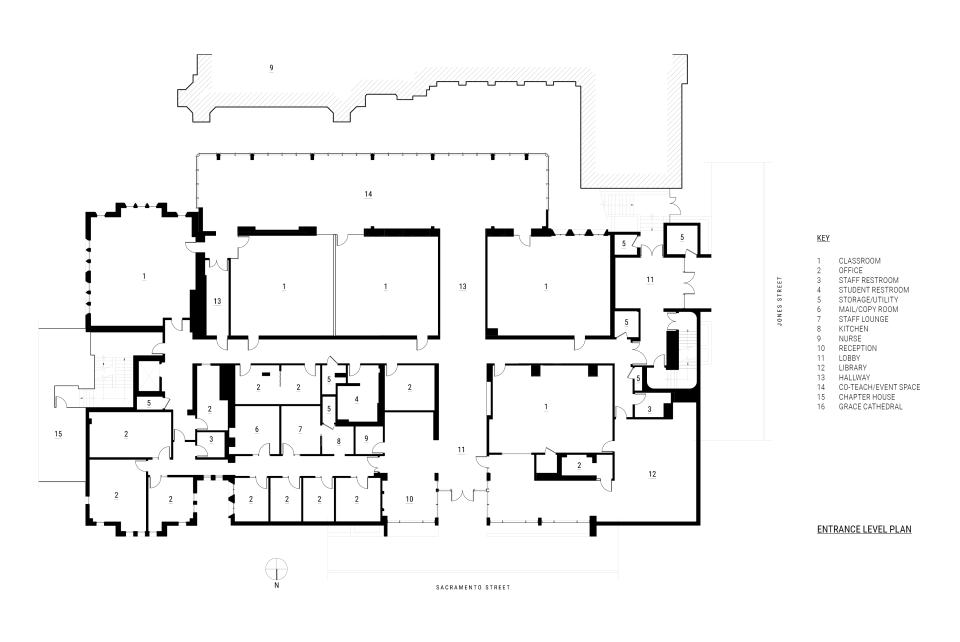 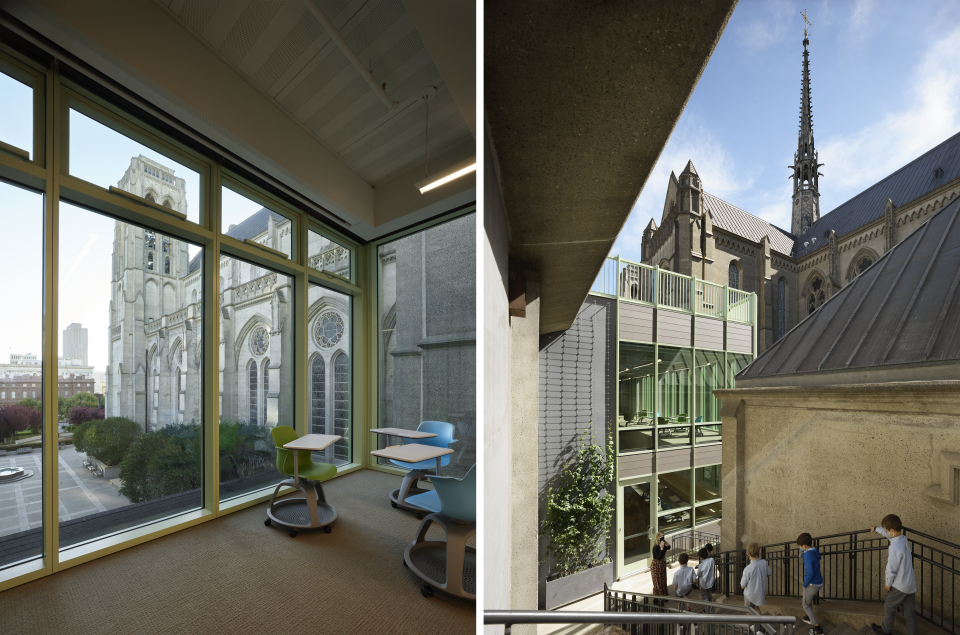 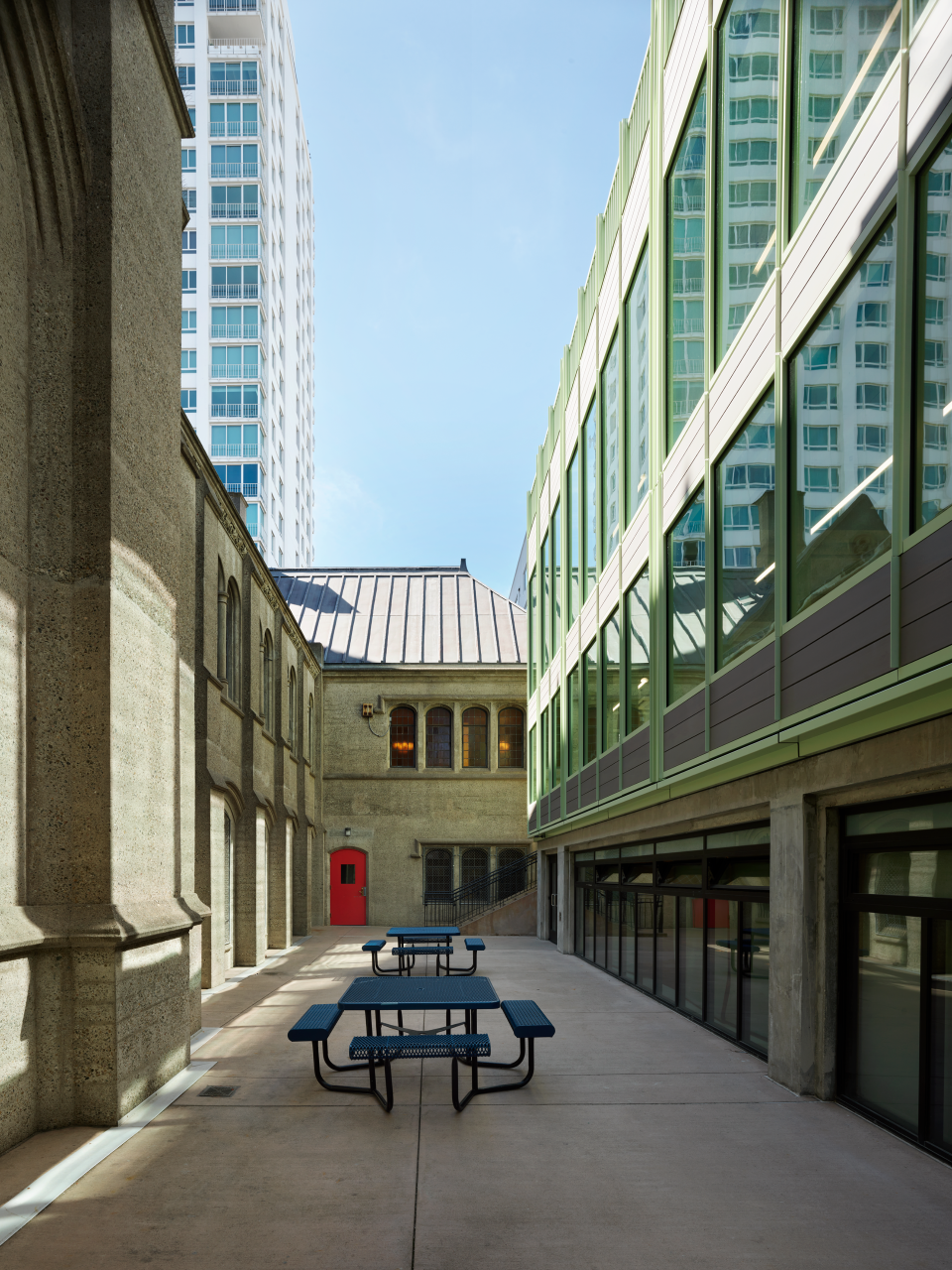